skip to main | skip to sidebar

Kakaban is one of the most famous islands in Derawan Archipelago. What makes it famous is that the island is very unique geographically. This island is an atoll which was lifted up completely and had evolved into an island.

Wooden trail in Kakaban
Since it was originated from an atoll, the island has a salt-lake in the middle part. In this salt-lake, there are, at least, four species of jellyfish. However, these jellyfish had lost their stinging ability from the evolution and adaptation processes. Nowadays, the jellyfish are completely harmless and once can just swim around with them.

Kakaban is an uninhabited island. Although it is uninhabited, the island is not abandoned. It is supported with a wooden trail to make the visit enjoyable including some gazebos for sitting around, a pier for swimming entry point, and garbage bins. One doesn’t need to pay anything to visit this extraordinary island. So, swimming around with non-stinging jellyfish for free seems a very nice offer, right? 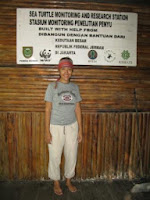 Sangalaki Island is located in the sub-district of Derawan. It takes around 2 – 3 hours speed boat ride from Tanjung Redeb. Since it is part of Derawan Sub-district, usually every tour package offers a trip to Derawan Island, Sangalaki Island, and Kakaban Island altogether. It offers a place to stay in Derawan and a day trip to Sangalaki and Kakaban. Both islands can be reached around 45 minutes speed boat ride from Derawan. 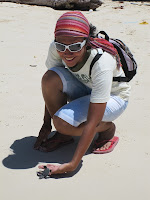 Sangalaki is a Marine Tourism Park (Indonesian: Taman Wisata Alam Laut). On this island, there is a Sea Turtle Monitoring and Research Station including a hatchery. One can camp on the island to witness nesting activity of sea turtles. Furthermore, one can also release sea turtles babies after they hatch.

But be careful with the monitor lizard, the natural predator of sea turtles eggs, and the itchy bug (Indonesian: tungau); these could make your camping turns into nightmares. The lizard normally won’t bother human but they might get attracted to your food supply and stealing it. While for the tungau, if you got it, just take a bath in the sea until the itches gone. In general, ask the ranger for advices before start camping.
Diposting oleh asti di 03.54 Tidak ada komentar: 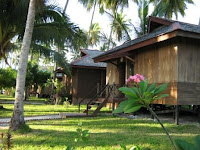 This resort is located in Maratua Sub-district, on a tiny island called, of course, Nunukan. Most part of the island are consists of stony coral and has no ground water which perhaps considered as ugly or uninteresting. But this is what I admire from the owner/ designer/ investor, he or she can make a beauty out of nothing. What a truly entrepreneur! 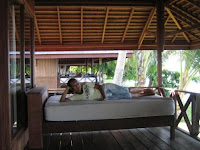 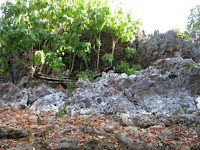 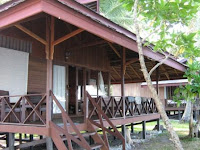 The resort is not just beautiful but also expensive. I was so lucky that I can experience its service. I have to host VIP guests of my office from Denmark. And although the trip itself was very mentally exhausting for me, but on a bright side, it’s a very nice opportunity to stay at a high-end resort :) 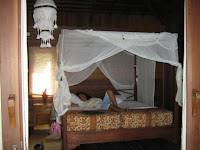 Getting Sick in Berau

Getting sick outside my home (i.e. Jakarta) and far from my family is my worst nightmare. I have experienced it once during my research in Makassar. Luckily, it happened in Makassar, a capital of a province which is easily accessed. After two nights of fever attacks, I just went to the airport in the next morning alone and flew to Jakarta. History said, I was suffered from Malaria.

Afraid that such thing might happen again, I always try hard to keep myself healthy. Eating healthy food and doing sport are part of my daily life. But apparently I have done it too hard. Too much sports and lack of rest have brought me to sickness!

On a one Saturday afternoon, suddenly I got a high fever. Although it’s very annoying but I know, nothing much I can do than drinking a lot of water. No sickness can be defined in a day, I have to wait until three days to get any blood test.

I was afraid of getting my Malaria back. But as I said before, nothing I can do until the third day. On Sunday morning, my fever has gone; but I wasn’t happy as Malaria only attacks in the evening.

Surprisingly, I had no fever on Sunday evening! My body temperature was normal the whole night. I thought I just gotten exhausted.

But on Monday morning, I felt my whole body aching! Since I didn’t have fever, I forced myself to go to work. I thought the ache came from my over training on sport. But my pale face couldn’t fool my coworkers. They recommended me to go to a doctor.

The doctor gave me antibiotic and anti-fever. He suggested me to take a blood test on Wednesday if my condition remains the same. The medicines were pretty strong; whenever I was under their influence, I felt OK. But once the influence finished, I became wilt again. During this time, I went to work for half day. After taken lunch I went home to rest.

On Wednesday, I decided to have a blood test. The result said that my thrombocytes level was low; one of signs of dengue fever. I went to a doctor again and she made another test which confirmed that it was dengue fever. She said that I can have a rest at home or in the hospital. My sickness level was still low, drinking a lot of water and consuming guava juice were enough to cure the sickness.

This was a dilemma for me. If I stayed at home, I had to serve myself. I had to prepare my own meal and cleaned the dishes, just like a normal day. It meant I wouldn’t have total rest as I needed it. However, the only hospital available in Berau was not covered on the insurance from my working place. I had to go to Balikpapan to get hospitalized. This was quite a journey but I would have total rest as I needed it.

After discussed it with my father and sister, I decided to go to Balikpapan. On Thursday, I was ready to go. However I needed a paper from the doctor that said that I was able to fly. Upon this, the doctor neglected the request. Instead, she asked me to take another blood test to check on my thrombocytes level.

So I did. And the result said that my thrombocytes level was increasing. The doctor told me that I’d better stay at home because I have passed my critical point; and I was entering recovery phase. I didn’t need to be hospitalized especially if it needed quite a journey to be there. So my travel was cancelled. I was just stayed at home until weekend.

Friends and Family
Starting from the first day I got fever, I informed my coworkers and family about it. Their reaction was very supportive. My family kept checking me by phone. While my coworkers, they made sure that my needs were fulfilled. They took me to doctors, laboratory, and brought lunch for me, etc.

I was so lucky surrounded with very attentive coworkers. It swept my nightmares away in being sick far from home. In addition, my family kept monitoring my condition. Even my brother from Saudi Arabia called me after hearing the news; he was worried that I had to be hospitalized. But the biggest surprise came from Lusi, ‘my family’ during my time in Bremen. She called me due to her feeling on me. She felt surprised to find that I was sick; which explained why she needed to call me suddenly. What a telepathy!

Although I could get enough attention and care when I was sick, but surely, I don’t want to get sick again. No matter close or far from home, being sick is always a nightmare!
Diposting oleh asti di 23.53 Tidak ada komentar:

This is my first time in going to a prison. Surprisingly it happened in Berau.

Again, it happened accidentally. I didn’t plan to go there, I even didn’t know the person whom I visit.

It started when me and my coworkers went out for lunch. One of my coworkers dropped the news, about one villager whom they knew was involved in a fight.

My coworker planned to visit the villager and she had arranged all the documents needed to visit a person in jail. She asked us to drop her at the prison.

But when we dropped her at the prison, the prison guards offer us to come along although we didn’t have any documents needed. So there we were, 11 people came and visited the villager without paper.

We had to leave our cellphone at the entrance and we got stamped on our hand. The meeting point for visitors and prisoners are a hall with concrete seats. It was just like a waiting room in a hospital or something similar. Far from my imagination; or maybe I watched too much movies… 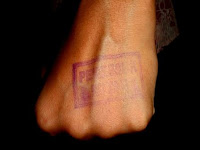 A little bit about me

This blog is about my new life adventure in Berau District, East Borneo. I am stranded here for working for TNC (The Nature Conservancy) at the Derawan Archipelago marine park.